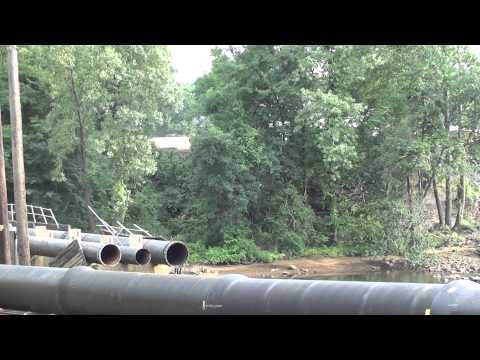 These pipes span across the Swimming River (and adjacent floodplain) at base of the wide concrete spillway at east end of the Swimming River Reservoir. This location is at the east end of Colts Neck, New Jersey, adjacent to Middletown, NJ (see map). Only the center section of pipes (about 30 feet long) collapsed. Pipes to the south and north remain, along with much of the wood enclosure. See photos below.

This report provides preliminary discussion about supports for the water pipes, based only on limited information to date (7-4-12). Police and NJ American Water representative would not allow observations to be made up close during visit on July 3.

The following preliminary conclusions are based on review of photos in news reports, along with observations made (and photos taken) on-site by this writer during evening of July 3, 2012;

Water pipes appear to be self-supporting between concrete cap members. Considering large size of pipes and relatively small spacing of supports (concrete caps) such self-support appears to be feasible, even with pipes filled with water.

Before the collapse, water pipes were enclosed by wood walkway and wood side walls.

One or more of the pile-supported concrete pile caps may have collapsed, resulting in total loss of support for water pipes at those locations. Most likely, pipes filled with water then were not strong enough to span between remaining adjacent supports.

Possibility of all three pipes collapsing together at the same time, due to an initial break in each pipe (without loss of supports), is quite unlikely, even if the wood walkway might have fallen onto the pipes.

Wood walkway appears to have served as a pedestrian bridge.

Ends of broken pipes (at south end of center section that collapsed) supported by concrete pile caps underneath pipes.

Pipe in foreground is temporary, installed on edge of the roadway after collapse of water-supply pipes.

Water is flowing down wide concrete spillway at east end of reservoir.

Per news reports (Asbury Park Press and Star Ledger) NJ American Water Company explained that they were aware of some problem with the bridge after Hurricane Irene at the end of August 2011. Details of such problem have not yet been reported.

Undermining ("scouring") of bridge piers and piles in waterways is a well-known problem that has been the basic cause of several bridge collapses in recent years. Decay of timber piles is also another typical problem.

Reporters should be asking the water company and appropriate government agencies to answer the following questions;

When was most recent inspection of pipes and supports?

Was inspection performed on regular basis?

Was any government agency responsible for checking that inspections were performed by the water company?

Does the water company have original design plans for the pipe bridge?

Were any structural defects discovered during recent inspections?

Did scouring of riverbed around timber piles occur during Hurricane Irene in August 2011?

Were any timber piles decayed? If so, how severe was decay?

Did water pipes have capacity to remain in place if one concrete pile cap was missing?

Are there any other similar pipe bridges in New Jersey maintained by water companies? If so, is the water company solely responsible for inspection and maintenance?